I scream and shout,
But there’s no one to hear me,
People pass me by,
A shadow on the pane,
A crack in the vain,
I am unable to open my eyes,
Air doesn’t seem to meet my lungs,
Dirty and ambiguous,
Images imprinted in my brain,
Every tick of the watch taunts me,
I am away from home,
The glitz and glamour washed away,
The steak reality breaks free,
I stand alone on a street,
On a path, where there is no place to breathe,
I stand alone in a crowd,
Lost.

Halloween’s origins date back to the ancient Celtic festival of Samhain (pronounced sow-in). The Celts who lived 2,000 years ago in the area that is now Ireland, the United Kingdom and northern France, celebrated their new year on November 1. This day marked the end of summer and the harvest and the beginning of the dark, cold winter, a time of year that was often associated with human death. Celts believed that on the night before the New Year, the boundary between the worlds of the living and the dead became blurred. On the night of October 31 they celebrated Samhain, when it was believed that the ghosts of the dead returned to earth. In addition to causing trouble and damaging crops, Celts thought that the presence of the otherworldly spirits made it easier for the Druids, or Celtic priests, to make predictions about the future. For a people entirely dependent on the volatile natural world, these prophecies were an important source of comfort and direction during the long, dark winter

Somehow all the religions narrow down to one belief that the dead have an extended life after death in other world. Even Indians believe in life after death. So this triggers a primary question in my mind “Do ghosts exist?” and “Are they friend or foe?”  But the returning of the dead on a particular dead sounds too creepy and also scary. May be that’s why on this day people dress themselves as ghosts so that the dead who wander around us consider them as fellow ghosts and do not harm us.

Halloween has always been a holiday filled with mystery, magic and superstition. It began as a Celtic end-of-summer festival during which people felt especially close to deceased relatives and friends. For these friendly spirits, they set places at the dinner table, left treats on doorsteps and along the side of the road and lit candles to help loved ones find their way back to the spirit world. Today’s Halloween ghosts are often depicted as more fearsome and malevolent, and our customs and superstitions are scarier too. We avoid crossing paths with black cats, afraid that they might bring us bad luck. This idea has its roots in the middle ages, when many people believed that witches avoided detection by turning themselves into cats. We try not to walk under ladders for the same reason. This superstition may have come from the ancient Egyptians, who believed that triangles were sacred; it also may have something to do with the fact that walking under a leaning ladder tends to be fairly unsafe. And around Halloween, especially, we try to avoid breaking mirrors, stepping on cracks in the road or spilling salt.

But what about the Halloween traditions and beliefs that today’s trick-or-treaters have forgotten all about? Many of these obsolete rituals focused on the future instead of the past and the living instead of the dead. In particular, many had to do with helping young women identify their future husbands and reassuring them that they would someday—with luck, by next Halloween—be married. In 18th-century Ireland, a matchmaking cook might bury a ring in her mashed potatoes on Halloween night, hoping to bring true love to the diner who found it. In Scotland, fortune-tellers recommended that an eligible young woman name a hazelnut for each of her suitors and then toss the nuts into the fireplace. The nut that burned to ashes rather than popping or exploding, the story went represented the girl’s future husband. (In some versions of this legend, confusingly, the opposite was true: The nut that burned away symbolized a love that would not last.) Another tale had it that if a young woman ate a sugary concoction made out of walnuts, hazelnuts and nutmeg before bed on Halloween night she would dream about her future husband. Young women tossed apple-peels over their shoulders, hoping that the peels would fall on the floor in the shape of their future husbands’ initials; tried to learn about their futures by peering at egg yolks floating in a bowl of water; and stood in front of mirrors in darkened rooms, holding candles and looking over their shoulders for their husbands’ faces. Other rituals were more competitive. At some Halloween parties, the first guest to find a burr on a chestnut-hunt would be the first to marry; at others, the first successful apple-bobber would be the first down the aisle.

Of course, whether we’re asking for romantic advice or trying to avoid seven years of bad luck, each one of these Halloween superstitions relies on the good will of the very same “spirits” whose presence the early Celts felt so keenly.

Creativity, knowledge, literature, aesthetics- these are just a few of the abstract concepts Knowesis has always been associated with. As the official magazine club of NMIMS Bangalore, we welcome the sheer amount of talent and the thirst for new experiences that come across in every entry we receive from our own students as well as other institutes. With the universe of corporate responsibility approaching, we aim at being the bright corner in the dark room; the one that will always be there for all those who wish to take a breather from all the rat race chaos and pressures.

Apart from coming up with two issues of the magazine in a year and an official Yearbook for the senior batch of the campus, our activities include a range of events that set us apart from academia; and help students dive into pools of refreshing originality and emerge rejuvenated.

Chalk the Walk– a fun poster making competition in association with Udyam, the CSR Committee for the annual Walkathon

Vice Versa– a stress busting event to get the innovative and exciting sides of students; the rules and format change every year 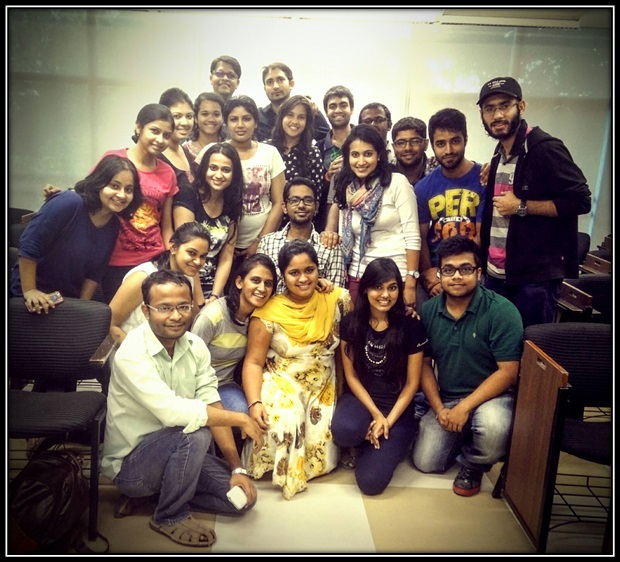